Amid much fanfare Tata Motors launched 10 new products under its Prima LX Range at Pragati Maidan in New Delhi. The event was a clear challenge that TML is not leaving any stone un-turned to save its turf. After all its question of Survival of Fittest.
Also Read – Saving the Home Turf
The Gross vehicle Weight (GVW) of the launched products ranges from 25T to 49T. This includes 4 Tippers & 2 Multi Axle Trucks in 25T & 31T Category viz Prima LX 2523T, Prima LX 3123T, Prima LX3123K, Prima LX2523K & 4 Tractors in 40T & 49T category viz Prima LX4023, Prima LX4923, Prima LX4928 & Prima LX4028.
With this launch the Product Portfolio of Tata Motors expands to a new level where in these products neatly fit in the Existing Range & the High End Prima Range of World Trucks.

This launch reminds me of a similar article written on this very blog 2 years back which focused on the new product developments by various CV manufacturers and an anticipated onslaught by the upcoming new entrant in Indian CV space – Bharat Benz.

Though as per plans CV manufacturers did launch their products in time yet last 2 years have been the worst hit for CV industry with TIV reducing to the all-time low.

Bharat Benz entered the Indian CV industry with 70 Dealers. With consistent sales in different segments BB has managed to clock sales which as yet cannot be considered viable but good enough for a new entrant in this dwindling TIV.

Recently DICV under which the Bharat Benz brand trucks are retailed in India made a filing with Bureau for Industrial and Financial Reconstruction (BIFR).

Today’s launch can be seen as Tata Motors’s quest in maintaining its lead to provide highly reliable products. Tata Motors understands the challenging environment in trucking & upgrading its customers to more modern Trucking system is the only solution.

With this launch TML intends to upgrade its customers to a higher Power to Weight (P/W) ratio trucks. High P/W ratio coupled with increasing infrastructure tends to lower down the Total Cost of Ownership (TCO) for the years for which vehicle remains in operation. With more refined aggregates, TML has gone a step ahead to enhance the number of years in a Life-cycle of a Truck.

Generally a Truck sees an average life of 48 months with its First Owner and can see upto 4-5 ownership shifts in a total life-cycle of 15 Year limit set by the government.

Though the LX range was conceptualized quite some time back but TML’s launch comes at a time when the CV industry has started showing little signs of revival. This could be seen as one strategic move by TML. Brief Salient features of the vehicles are as under:- 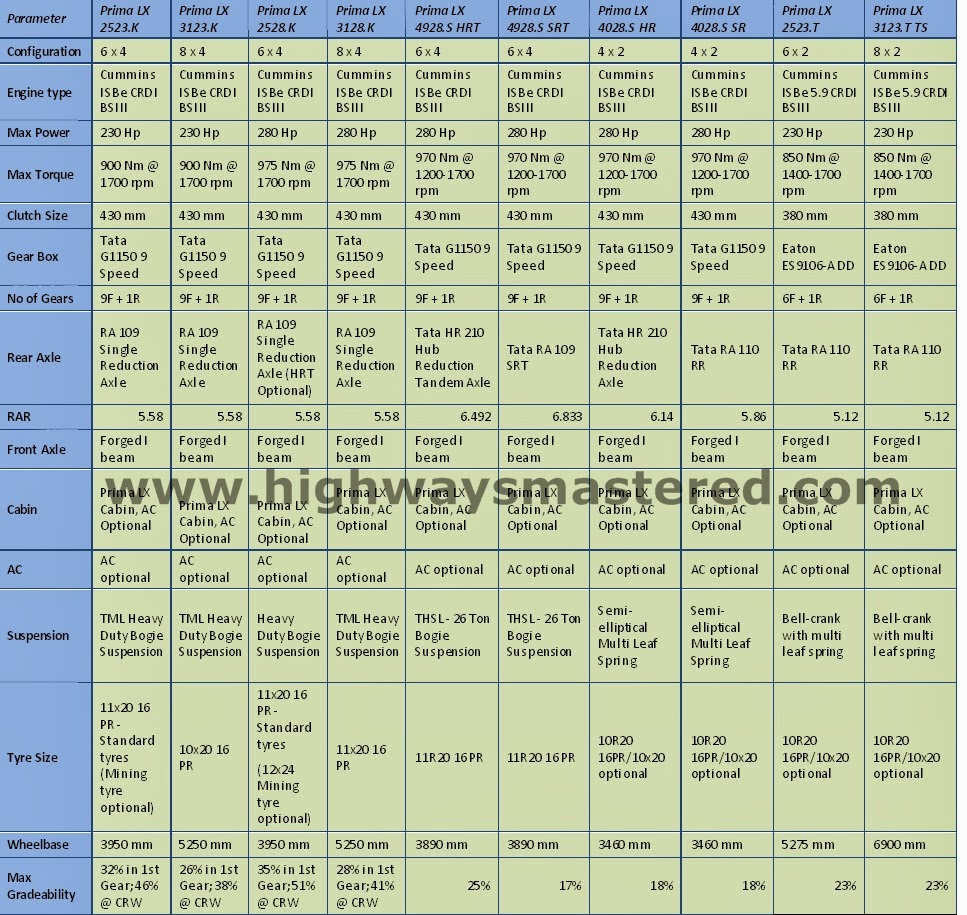 So finally the Bull Horns are locked and coming months could well be an Acid Test for their Zeal to Supremacy.