Skip to content
Today we all drive high ends cars, fancy super bikes, follow Formula 1, MotoGP and admire the Need for Speed. But do we really understand when the comparison charts are drawn between these Mean Machines. Do we really understand when the analysts actually talk about technical aspects of the vehicles? Or for that matter when you enter a showroom the executive gives you a Bumper to Bumper detailed presentation of the Car or a Bike of your interest.
Well here we go and try & understand what these all jargons are. 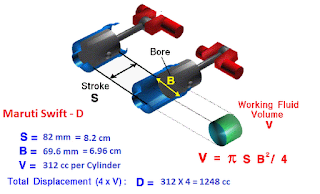 After getting an insight to the Engine HP, Torque & Ratios one of the most important parameter for deciding the vehicle performance is the Torque on Wheels. Until and unless an efficient and powerful engine is coupled with a gear box with optimum gear ratios & Final Drive the performance of the vehicle can never be of the desired levels for which it has been designed.
Torque on Wheels further gives us a comparative idea of the pulling power & ability of two vehicles to over come different gradient levels. Nomenclature of this ability of the vehicle to cover come gradients is “Grade-ability” of the vehicle.
To understand it well “Torque on Wheels” is calculated as per the below formula:-
Engine Torque X Gear Ratio X Final Drive Ratio
To elaborate, below is the table giving the calculation of Torque on Wheels.
*Approx 8% loss in TOW to be considered for practical conditions.
As you see the Torque decrease which each changing gear and getting to its least value in the Over Drive Gear. As mentioned above Torque is inversely proportional to Speed of the vehicle. Highest Torque is available in First gear or for that matter in Crawler Gear if vehicle is fitted with it – depending upon application of the vehicle. First gear transmits Max. Torque to the vehicle as opposed to Over Drive which gives the vehicle its Max. Speed.
In Over Drive Gear the gear ratio is less than “1”. This symbolizes that the No. of teeth on Driven Gear are lesser than the No. of teeth on the Gear driving.
Higher torque on wheels gives way to a new terminology – Grade-ability of the vehicle.
Gradeability in % 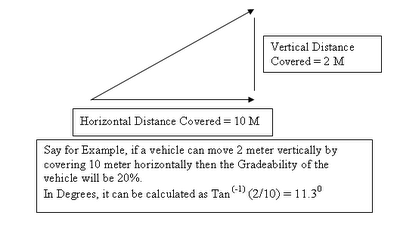 Well this is it as of now. Watch out this space for more insight into our Automobiles.
Share